← Back to all news

Mary Jane Beaman Phillippe was named superintendent of Greenwood Village South in 1965. Superintendent was the job title used in lieu of Executive Director. She was instrumental in growing GVS by providing modern day programming and expanding the resident population. She left the position in 1969 to pursue advocacy for the aged at state and national levels.

In 1999, Mary Jane returned to GVS as a resident and established the historical committee that is in existence today. She is fondly remembered by tenured GVS staff and residents.

As we entered our 60th year, GVS wants to dedicate this learning space to someone who embodied education and learning since we were founded by teachers. After researching more about Mary Jane Beaman Phillipe, she was a lifelong learner and received multiple awards and accolades for her work in education and senior living. She seemed like an amazing woman who deserved to be remembered and represented at GVS. 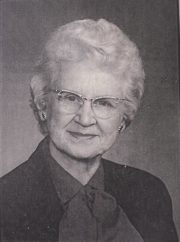 Thank you for your interest in Regency Oaks!
CLOSE
top